Based in Chelmsford, Crash Detectives Ltd provides forensic accident investigation, research, accident reconstruction, cause analysis, simulation and animation of road accidents to its clients throughout the nation.
Get In Touch

At Crash Detectives Ltd, our staff can also assist you with evidence appraisal, evidence gathering, interviewing, scene photographing and scene video recording. You are invited to view our case studies of our past investigations.

In Majorca a coach engaged in transferring tourists from their hotel to the airport, caught fire, injuring six of the 52 passengers and destroying most of their luggage.

The tour operator responsible for the tourists instructed us to investigate the circumstance of the incident. We went straight to the coach operator's workshop where the vehicle had been taken and discovered repairs to the braking system were already underway.

The English courier who had been on the coach at the time of the fire was interviewed along with passengers at the hospital. We gathered information that after collecting passengers from the first hotel they noticed smoke in the passenger cabin and the courier alerted the coach driver.

At the next pick-up point, more passengers boarded when the driver was seen crawling under the rear of the coach. He informed the courier that the problem has been fixed and the journey continued. After several more hotel stops the coach commenced the journey towards Majorca Airport when the cabin started to fill with thick black smoke as the floor, seats and curtains ignited. The driver pulled over to the side of the motorway to commence evacuating the passengers and they all escaped the burning vehicle, however several sustained serious burns necessitating emergency hospital treatment. 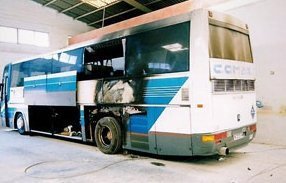 During the investigation, it was discovered that the rear left brake had been seized in the on position after the brake pedal was released, causing the brake shoes and road wheels to overheat.

The driver had identified the problem when he crawled under the vehicle and he pulled the brake rod back so that the brakes were fully released. However, on the next occasion, the brakes were applied and then released the rod again stayed in the on position, causing the brakes to become hot, the tyres ignited and set fire to the floor of the coach.

With the assistance of an interpreter, we interviewed the coach driver who admitted trying to fix the brakes outside the first hotel and then continuing to drive the vehicle knowing that the brakes were defective and there was a serious risk of fire.
By reaching the location of the damaged coach immediately after the incident occurred, we were able to identify the cause of the fire before the coach operator hastily carried out the repairs clearly intending to complete the work before blame could be apportioned.
Our report on the incident placed the tour operator in a favourable position to claim back from the coach operator the significant compensation they had paid out to the tourists.

Late evening a man was driving his small hatchback motorcar along a rural road approaching a residential area and the start of a 30 mph speed restriction. From his left, a group of youths unexpectedly ran into the road and directly in front of his vehicle. With quick reaction, he swerved around them, but a youth who was on the far side of the group and unsighted continued to run directly into the path of the car.

The driver applied emergency brake but a collision occurred and tragically the youth sustained fatal injuries. In shock, anger and the mistaken belief that the driver was responsible for the collision, the group of youths attacked the car driver and vandalised his vehicle. Marks found on the road surface indicated that the front wheels of the car started skidding just before the impact and its initial speed was calculated at 42 mph.

The photographs show the car in its post impact position with the front wheels still positioned on the end of the skid marks. The damaged windscreen and horizontal surface of the bonnet are typical of a pedestrian impact and in this instance illustrates that the deceased was aligned near the vehicle's offside headlamp when he was struck, rotated onto the bonnet and his head impacted high on the windscreen.

The car driver was charged with the offence of causing death by dangerous driving. We were instructed to investigate the incident by lawyers acting for the defendant. Our investigations and report showed the car was not driven at an excessive speed, could have comfortably reduced sufficient speed to pass the speed limit signs at 30 mph and the driver reacted quickly to the initial unexpected hazard. During the trial, the driver was acquitted of the charge.

Feel free to call us for further details on accident reconstruction and traffic accident investigations in Chelmsford and across the nation.

Late night in a rural area a student was returning home from evening classes, riding his pedal cycle along a country road. He was struck from behind by a car travelling in the same direction. The collision occurred close to a turning on his right leading to the cyclist's home. The impact was severe, the cyclist being thrown back over the roof of the car and his cycle projected forward over a tall hedge.

The corresponding damage between the front of the car and rear of the cycle together with the location of the skid marks relative to the edge of the road showed that the cyclist was near the centre of the road when the collision occurred. It was alleged by the car driver that the cycle was not displaying lights and could not be seen on a dark road. The remains of the cycle rear light and its two batteries were found scattered around the scene and when the bulb was examined it was found to have been illuminated when subjected to a sudden shock. When pieces of the lamp were glued back together and re-assembled it was found the lamp was still capable of working.

The driver of the car was convicted of careless driving and driving under the influence of alcohol. The Photographs to the right show how the cycle was re-positioned against the front of the car to reconstruct the collision, the damage on the car shows how the cyclist fell back onto the windscreen, crushing the roof downwards before falling onto the road behind the car.  The cyclist survived the collision but did not fully recover from his injuries.

On a foggy morning on the M25 motorway, congested traffic was moving fast and closely bunched together when vehicles in all three traffic lanes slowed abruptly. The articulated lorry with the orange container stopped without difficulty, but the red car following close behind drove into the rear of the lorry.

The blue car had been following the red car and was unable to stop in the distance available. It can be seen the front of the blue car has gone under the rear of the red car lifting it clear off the ground. This can often happen when vehicles are under heavy braking because the load distribution moves forward; compressing the front suspension, but the rear of the car becomes lighter and rises vertically. In this instance the front of the red car has dipped, the rear has risen up and whilst in that position the blue car also under heavy braking has gone like a wedge under the back of the red car. The situation has then been exacerbated by the blue lorry colliding with the back of the blue car.

The ropes tied to the red car and the central barrier where necessary to steady the vehicle whilst rescue services cut it open to extricate the trapped and injured occupants.
To find out more about our services get in touch with professional team today.

A collision occurred in the busy A127 dual carriage way outside the Borough of Southend-on-Sea in Essex. The resultant backlog of slow moving traffic soon tailed back to just below the brow of a hill and multiple collisions occurred when traffic came over the brow fast with insufficient distance to stop.

Several people were injured and many vehicles extensively damaged. We were jointly instructed to investigate the incident by four firms of solicitors acting for clients involved in this incident. In most multiple collisions, the sequence of impact can be broken down into small groups of collisions, within the same general area. We were concerned with what appeared to be a group of seven vehicles at the front of the collision.

A police accident investigator attended the scene soon after the collision occurred and recorded important information, but in accordance with police policy, he did not prepare an investigation report. During a formal interview with this officer, we discovered he had photographs, a scale plan and a record of the damage and paint transference from all the vehicles involved. This information with copies of press photographs and further interviewing of witnesses enabled us to deduce the precise sequence of the collision and identify the guilty drivers.

We discovered that during the collision three of the vehicles spun around and were involved in at least two impacts with other vehicles. The car at the front of the collision sustained considerable rear end damage, but strangely its driver failed to stop and was never traced.

Late at night, a police traffic officer stopped a Porsche motorcar at the roadside. It was alleged that the Porsche had been followed and recorded by the VASCAR speed detection device at an average speed of 99 mph along a stretch of dual carriageway where there is a 70 mph speed restriction.

In his prosecution report the officer identified the start and finish reference points and time it took for the Porsche to pass between those two locations. 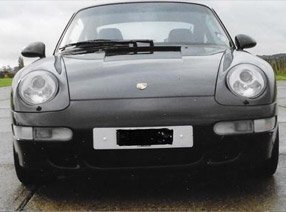 The case went to a magistrates court where the Porsche driver was convicted of driving at excess speed and disqualified from driving. Having been instructed by the driver's defence team to investigate the circumstances of the incident prior to an appeal hearing, we discovered that the distance between the two reference points used by the police officer was almost double the distance shown in his report. In these circumstances, if the Porsche had travelled double the distance in the same time span, it follows that its average speed would have an unrealistic average speed approaching 200 mph.

An average speed approaching 200 mph was unrealistic due to the nature of the road and vehicles involved. At the crown court hearing, having been shown the police officer's error the crown prosecution offered no evidence and the appeal was successful.

The red car seen in the photograph nearest to the camera was on the wrong side of the road overtaking another vehicle on approach to the junction on the right. The other red car emerged from the junction turning to its left, the driver had seen the road was clear to his right but without first looking to see if it was clear to his left.

The clearly defined tyre skid marks on the road surface serve to establish the precise position of the overtaking car immediately prior to the collision. 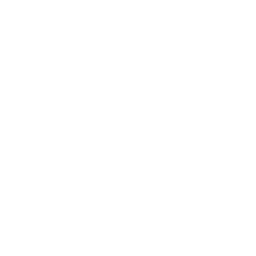